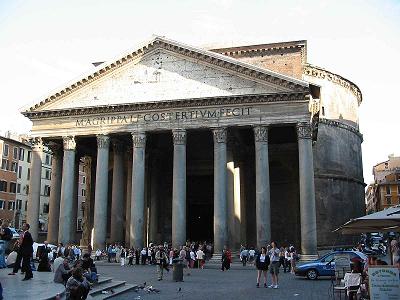 My Art History class is currently covering the art and architecture of the Roman Empire, and I was blown away by what I learned about the Pantheon.

First of all, the Pantheon we now know isn't the original. The original, much smaller Pantheon was built by Marcus Agrippa (close friend and son-in-law of Augustus) between 27 and 25 BC, and you can see Agrippa's name on the newer Pantheon, which was built by the Roman emperor Hadrian between 118 and 125 AD.

The Pantheon is the realization of the full potential of Roman engineering. Their development of the arch gave us the dome, and the dome atop the Pantheon, at 142 feet in diameter, is larger than the one on the White House. The Romans, who were the first to use concrete, really mastered the craft in the Pantheon, which we can witness just by looking at how well it's been preserved over the thousands of years it's been standing.