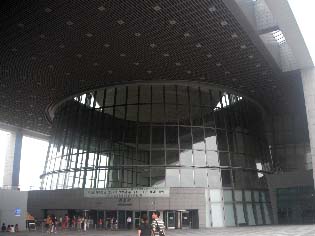 Nothing to do in Seoul?  Check out a museum!

Seoul is such a busy city that it's hard to find yourself with nothing to do.  However, if you are ever stuck I recommend spending the day at one of the MANY museums.  There are museums dedicated to anything and everything, including art, history, the olympics, and even the popular Korean food kimchi.

The great thing about going out to these museums is not only do you get to learn more about the culture, but you also get to practice what you've been learning in class.  After learning one of the sets of numbers I found it great fun to go to the museum shops and ask what the price was for different objects.  Not only did this build my confidence with what I had been learning in class, but I also got to practice my pronunciation.  Many of the shop clerks were happy to help correct me and were very patient with my slow speech.

Even though it was great to practice the language, there was still plenty to learn in each of the museums.  So far I have visited three museums: National Museum of Seoul, Seoul Museum of Art, and the Kimchi Museum.  All of these museums had explanations of the exhibits in both Korean and English so I was able to learn about the history without having to know the language.  Also, before entering the exhibits most of the museums offer audio tours for less that 5,000 won.  All you do is give the museum employee a form of ID (it does not have to be your passport) and they will give you a MP3 player for you to use during your visit.  The audio will start automatically as soon as you stand in front of the different exhibits.

One of the things I did not expect was to be followed around in every museum I went to.  No matter which museum I toured I was closely followed by a group of young children.  With my blonde hair, freckles, and blue eyes I stick out like a sore thumb in a crowd of locals.  The reactions I received varied in each museum but I always received some form of attention.

In the National Museum of Seoul (6th largest museum in the world) a group of 7 year old girls followed me around for most of the first floor (which is a pretty large space) saying, "Hi," "It's nice to meet you," and then running away giggling.  They even dragged their teacher and a male chaperone and forced us to have a very awkward introduction.  However, after I said "annyeong haseyo" – a polite way to say hello) the girls froze and ran away surprised I spoke Korean.  Luckily for me they did not continue the conversation, because at the time that's about all the Korean I knew.

After visiting the national museum I then went to the kimchi museum.  In this museum they explain the process of making kimchi and the history behind one of Korea's most famous foods.  At the end, there is a place for you to try all different types of kimchi, and this was yet another spot for me to become some sort of spectacle.  I was trying a piece of kimchi when a mother and her young daughter came up to try some too.  However, the mom wanted to take a picture of her daughter trying the kimchi.  I politely backed out of the photo, but after many gestures the mother insisted I be in the picture with her daughter.  They got a kick out of "migook salam"  American trying kimchi and I enjoyed being able to interact with a Korean family.

So, if you ever want to practice your Korean, be stalked by kids, or most importantly learn a little more about the culture, I highly recommend visiting one of the many Seoul museums.  I only wish I was here longer so that that I could visit them all!!!

Here I am trying kimchi at the Kimchi Museum in the Coex Mall National
Museum of Korean – the 6th largest museum in the world!

Read all of Josephine's blogs from Seoul, Korea.