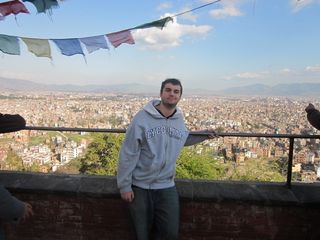 With AmeriSpan's Volunteer placements in Nepal, students are required to take a week of culture classes before beginning their volunteer placement. AmeriSpan currently has a volunteer in Nepal who has been thoroughly enjoying this aspect of his trip. Our Nepal school director writes:

"On Monday, February 21, Glenn ("Ganesh") had language in the morning and then went to Patan Durbar Square, Golden Temple and Kumbheshwor on a historical and cultural orientation tour. He had typical Newari food for lunch in Patan. After that, he observed a typical marriage ceremony.

On February 22, he had language in the morning and then attended a lecture on religion and culture  before his lunch break. After the lunch break, he went on a scavenger hunt! He had to buy some local items at a nearby market using local transportation. He very much enjoyed it and felt very independent – it really helped build his confidence. Yesterday, he had language in the morning and then he had another orientation tour to Bouddhnath and Pashupatinath. Today, he spent the day at a local school to visit and practice teaching."

Due to unreliable internet connection, Glenn A.'s family is forwarding us select emails and has given us permission to reprint these so we can share on our blog.