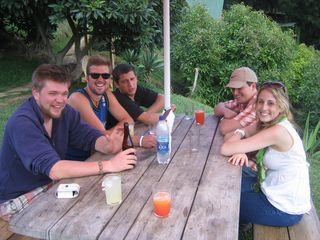 It’s been roughly two weeks since I arrived here in Antigua. I´m starting to get a feel for life here as a Spanish student, and the ways in which I prepared effectively (or, not) for the experience. As it turns out, I packed my bags well, but perhaps neglected to pack my brain with a sufficient amount of Spanish to fully launch my learning from day one.

My decision to study here in Guatemala was influenced as much by price (aka, cheap) as it was by the reputation of this town as a hangout for similarly minded students. I had heard from friends that, while the heavy presence of foreigners can detract from the immersive experience, the active social scene here eases the transition from life at home to life in a foreign country. Since I was looking for a summer of both language study and vacation, it seemed like an obvious choice.

In retrospect, I should have taken this warning more seriously. While I am fully appreciating the social

experience (and have already made several close friends in my short time here), it takes a concerted effort to speak Spanish throughout the day. While most Guatemalans I´ve encountered thus far speak little English, if any, the many foreigners at the bars, restaurants, coffee shops and schools tend to communicate in English. Great for socializing (particularly for a Spanish novice like me), but not so great for rapid learning. This isn´t to say that opportunities to speak Spanish outside of the classroom don´t exist. To the contrary, I speak Spanish with my homestay family, teachers, and with Guatemalans I encounter throughout my day as you would in any travel situation. However, as a Spanish beginner, it´s immediately clear to whoever I meet that I am a poor communicator in this language. As a result, people who know English (as the majority of travelers and students I´ve met do) tend to immediately switch over to that with me.

To be honest, I had not anticipated having this much difficultly making time to speak Spanish (since it´s also entirely my fault that I allow people to talk with me in English). Students with a better background in the language are certainly creating more opportunities to converse with locals and their homestay families. For beginner students considering Antigua, I would suggest gaining some familiarity with the language before you go. I practiced a bit on Rosetta Stone before I left, and, while I found my very basic knowledge invaluable on my first few days in order to merely get around the city, I see how a more serious commitment to learn prior to my departure would have opened so many more doors for conversation off the bat.

I´ll cover my packing for the trip, particularly in regards to travel during the rainy season, as well as safety tips, in my next entry. In the meantime, I´m going to hit the Spanish books so I can finally start talking…

Photos: An afternoon socializing at Earth Lodge with friends from the U.S. who are living and traveling in Guatemala. While I´ve thoroughly enjoyed afternoons like this, we converse in English (of course), detracting from opportunities for me to practice what I learn in the classroom. Earth Lodge is a lodge-bar-restaurant overlooking Antigua, and makes for an idyllic day trip or overnight from the city.

Read all of Sarina's blogs from Antigua