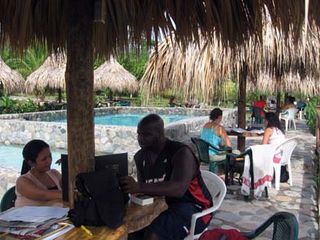 I've learned in Honduras that it's best to just go with the flow… Or sometimes the lack of flow.

This morning while I was in the middle of washing my hair in the shower, the water suddenly turned off! I waited a few seconds to see if it would restart, and when it didn't, it struck me that I was standing in the shower with shampoo in my hair and no water. I just laughed. What else was I supposed to do? So, I got out, used a tiny bit of my drinking water to get the excess suds out, and now I'm sitting on my bed in a towel waiting for the water to come on again so that I can finish what I started. (Thankfully today is Sunday, so I'm in no rush to go anywhere.)  I've learned that there is really no reason to stress the things I can't control, and- if possible- I try to enjoy the unexpected!

Yesterday morning, for example, the family that I live with ran out of drinking water, and for some reason (I don't quite understand) we could not get more until today. It turned out not being so bad, though! I got to help collect oranges from the tree outside and juice them so that we could drink orange juice. I've had fresh-squeezed orange juice before, but never from oranges that were just picked, and it was amazing. (Interesting fact: the oranges that grow here aren't orange. They're green! Apparently oranges only actually turn orange in cool climates, and most of the oranges we see in the grocery store were artificially turned orange after being picked.) I also tried juice from a fruit called "tamarindo" yesterday, and it was so good! If you ever get a chance to try it, I recommend you do. It's an oddly-shaped brown fruit, I think, and maybe it grows in the U.S., too, but I'd never heard of it. (I live in Texas, though, so I guess that isn't saying that much.) Last week I also tried juice from "nance" berries (pronounced "nacy," but I could be butchering the spelling of that horribly, sorry). Nance berries look sort of like blueberries except that they're yellow, but they taste unlike anything I've ever had before.

So, long story short, things don't always go exactly as planned in Honduras, but I'm learning how to live in spite of that, and sometimes very good things come of it!