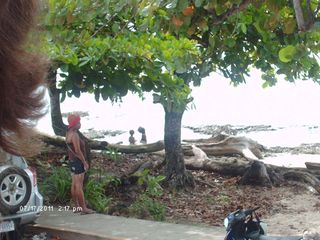 My last week in Costa Rica was a fun but tragic moment. We got new students on Tuesday. There were three from France and one from Germany. They were friendly.

On Wednesday, My teacher took us on a trip to "El Museo de Los Ninos." We each were given an assignment to listen and explain later(in Spanish) what we learned about that subject. My assignment was El edificio(the building).The building used to be a prison for men years ago. We also learned about the culture of Costa Rica and how modern foods and objects they used evolved. Another subject we learned about was the banana and coffee in Costa Rica. Costa Rica has a rich culture and produce great products countries all over the world use. The museum had a great variety and objects to touch, feel, and read about for kids. I really enjoyed it. Afterwards, my friend Jessica and I walked around San Jose and went to a cafe for lunch.

On Thursday, Jessica and I went to our favorite cafe once again called Kaffa Cafe. We got a quick dessert and met Victoria(a new student from France) and went to San Jose. We walked around for a while and went to another mercado next to the national museum. I brought a beautiful lizard bracelet.

Friday was my last day and night in Costa Rica. At school we went to class and afterwards everyone gathered to say farewell to those leaving. I was among those saying goodbye to Costa Rica read my farewell speech and received my completion certificate. Next, Jessica Valentine went to Kaffa cafe one last time.Then we took a bus and taxi to a mall in San Pedro. Afterwards we each hugged each other tight and kissed each other goodbye since all three of us were leaving this weekend. I didn't get to say goodbye to my host parents or host sisters. Only my host brother was there when I left. I was upset, but a little excited to come home. My last night I wrote every member in my host family an individual letter even though I know some of my grammar was incorrect. They slipped a letter under my door thanking me and saying how much they enjoyed me there and that I will always have a family in Costa Rica. I miss them a lot already.

When the driver came to get me from the house, I put my stuff in the car and kissed and hugged my host brother goodbye. As we pulled out the gate onto the road I tried my best to hold back tears, but sometimes trying isn't enough. A few tears fell as I thought of leaving the country that taught me so much. Costa Rica is a country that I have such a strong cultural connection with. They have American ways but still incorporate their culture in the foods, daily life, and teaching. I love Costa Rica and will make sure I return shortly. I will never forget the people I have met or what the teachers at school have taught me. As we took off in the air in the plane, I looked back till the beautiful small country of Costa Rica was out of sight. One tear dropped but a smile appeared simultaneously. I truly lived the Pura Vida.

See all of La'India's blogs from Coronado