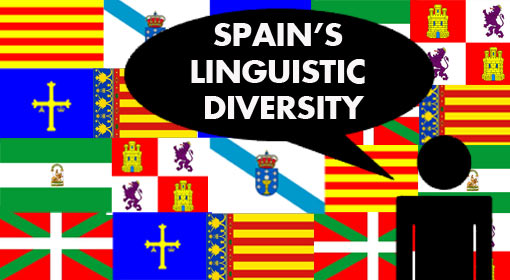 Even though many people who study Spanish might not know, there is more than one version of Spanish spoken in Spain. There is a variety of languages and dialects to be encountered when traveling from north to south and from west to east that are influenced by the various cultures and languages of invaders during the country’s history.

The origin of the Basque language is more or less unknown. Most popular theory says that it stems from the Caucasian languages which are spoken in the region between Russia and Turkey. This could be explained by the presence of people from this region in 1200 BC on the Iberian Peninsula. However, the expanse of the language was reduced by Latin and Castilian such that today it is only spoken in the Basque country in the northernmost parts of Spain.

The Galician language of the northwest of the peninsula is strongly influenced by Portuguese and, typical of a romantic language, results from the evolution of the Vulgar Latin. The language sank into oblivion at one point but then experienced a revival during the 14th century when great poets came up writing in Galician.

The Catalan language at on Spain’s eastern coast, including the regions of Barcelona and Valencia, evolved directly from Latin. Catalan literature saw great success during the Middle Ages but was almost abandoned from the 14th until the 18th century when the use of the language was limited to administrative documents. Today, with almost eight million speakers, the language is more important than ever.

Next to the different languages, there also exists a variety of dialects in Castilian which are however mutually intelligible. The two main families of dialects are those of the north and the south with its border running laterally at the latitude of Madrid. The dialects of the north are not as strong but more diverse than their southern counterparts. The southern dialects, on the other hand, tend to be characteristically strong and swallow, for example, the endings of words or even consonants in the middle of the word.

In all parts of the country are Spanish schools which offer courses in Castilian Spanish. All the guest families and hosts for students subscribed to these courses speak Castilian too. However, if you want to do a Spanish immersion program by being entirely surrounded by the most “pure” Spanish, the region Castilla y Leon is highly recommendable. The city of Salamanca, for example, is a popular destination for many students from Brazil, who are keen on learning the original Spanish rather than going the easy way to neighboring Spanish speaking countries: Argentina, Bolivia or Colombia.

The languages and dialects in Spain form a colorful mix and make studying Spanish in Spain all the more interesting and diversified!