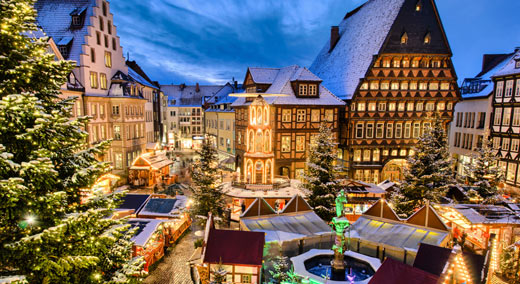 Christmas is celebrated differently in every country, and this time we’re in Germany…

Advent is a very important part of Christmas in Germany; typical celebrations start on the 6th December with Nikolaustag (St Nicholas’ Day). The night before, children leave their freshly shined boots outside their doors to wake up to them filled with candy and other small gifts. Indeed if they have been “bad”, they will instead be greeted with a boot filled with twigs, provided by St Nicholas’ evil sidekick, Knecht Ruprecht. Other traditions that take place during advent undoubtedly include advent calendars. The tradition of advent calendars in Germany goes back to the 19th Century, where children would draw Christmas themed pictures on the 24 days leading up to Christmas and hang them around the house. The first chocolate-filled advent calendars appeared as early as 1958 and have since been a very important part of Christmas, for children in particular. Another similar tradition is that of the Adventskranz (Advent Wreath), which is widespread in German-speaking Europe. It composes of a decorative wreath where a new candle is lit and placed in the wreath each Sunday on the lead up to Christmas.

Christmas markets pop up all over Germany as early as the last week of November, where you can enjoy the lively festive atmosphere, as well as buy all sorts of German Christmas foods, such as Lebkuchen (gingerbread), stollen and marzipan, as well as sample the German’s version of mulled wine, glühwein. The towns are filled with decorative Christmas lights and trees; trees being an extremely important tradition in Germany as this is where the concept of bring Christmas trees into your home originated, in what we date back as far as the 16th Century. Christmas trees are traditionally decorated by families in Germany on Christmas Eve; some families even prepare a room for Christmas and keep it locked, to then ring a bell and surprise the children with the presents under the decorated tree.  Children will leave their Christmas lists out on the windowsill during advent for the Christkind, a blonde “Christ Child” angel with a white robe and wings. Presents are normally opened that evening, as well as a feast of what often consists of karp and kartoffelsalat (potato salad); avoiding meat for religious purposes, the religious people also attend midnight mass. On Christmas Day a typical meal would involve roast goose, potatoes and vegetables, with a selection of sweet German breads flavored with cinnamon, and marzipan for dessert.

The celebrations don’t just stop there. After Christmas day, between the 27th December and the 6th January, Sternsingers, or “star singers”, a group of four children dressed up as the three wise men and the star of Bethlehem, visit houses to sing carols and then sign the door of the house when they have finished, which is bad luck to rub off, but it usually fades before the 6th January. The 6th January, epiphany, or Heilige Drei Könige, the Day of the Three Kings, celebrates the arrival of the Three Wise Men in Bethlehem. Families spend the day attending church services, or the children dress up in the Three Kings’ costumes, singing hymns or acting out the Christmas story. Some people gather the night before to toast good health to friends and family and drink bockbier, a beer specifically brewed for this season. Epiphany marks the end of the Christmas season for Germany and Europe.

Now you know that Germany has its own unique way of celebrating Christmas, it might be worth a visit to appreciate their traditions for yourself. You can roam the Christmas markets, the decorated streets, and enjoy the food, drink and unique atmosphere that this country which is full of surprises has to offer.