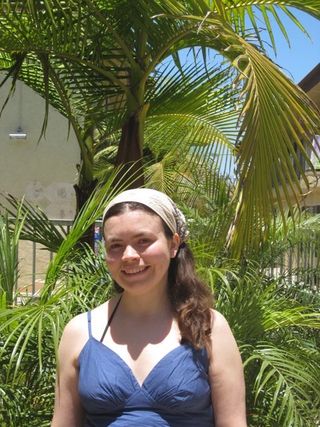 Originally from Albuquerque, New Mexico, I’m currently living in San Diego.  I’m about to leave for four weeks of Spanish immersion in Heredia, Costa Rica.  I took Spanish for four years in high school and one year in college.

I studied abroad twice in Europe during college; both programs focused on culture rather than language.  I loved my time there, but something was missing.   I found myself longing for more ways to communicate.  I would memorize words of every language I encountered and made meaning of whatever I could.  After a month-long art program in Paris, I started to understand French in certain contexts.  This came as a surprise to me, since I had never formally studied French.

What would happen then, I wondered, if I were immersed in a language I had previously studied?  While I have always been good with languages, I became frustrated with Spanish classes because I would stop using the language the second I left the classroom.  My comprehension was decent, but I found myself tongue-tied when it came to speaking in real life situations.  I felt I needed a push, an experience that would challenge me to speak the language on a daily basis.

While I didn’t do a language immersion program in college, I kept that idea alive for several years.  For the past year, I’ve studied on my own and become a little less rusty.  When the chance came up to study Spanish in Costa Rica, I didn’t hesitate. I’m taking a month’s leave of absence from my job to pursue a dream.  Hopefully, I will come back with more skills and confidence in the language and myself.

Now I’m down to the last days of preparing for my trip. There’s the physical part of it – laying out all of the items, folding and placing them in my luggage.  It’s challenging to fully mentally prepare for a trip because you can never precisely anticipate what it will be like until you get there.  I have cross-referenced guidebooks with the AmeriSpan pre-departure and packing guides, and consulted people who have traveled to Costa Rica.  In the end, I will have to trust that I have what I need.   In this countdown, there is only so much time to pack, review vocabulary and grammar, and wrap up projects at home and work.

So, here I go.  I look forward to sharing more about my adventures!

Read all of Jennie's blogs from Heredia