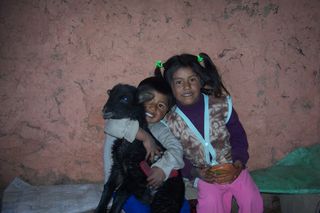 I spent my second week working at Madre Teresa de Calcuta in the afternoons with my friends Elizabeth and Jen.

The first time I was showed around the place, I wanted to cry.  I think I almost started a couple of times, but here's the set-up: the place houses men, women, and children suffer from varying mental and physical disabilities and is run by a group of three nuns.

They receive no help from the government or sponsors and solely depend on donations from the community and the time of the people.  On our first day, we decided to work with the children because we thought it might be easier on us but it was still pretty disheartening.  There were 22 of them with varying degrees of autism, down syndrome, and paralysis.  The saddest part about this place though was the lack of medical assistance; there's no doctor on-site or any working nurses.  Two times a week a physical therapist comes in to work with a couple of the children, but the help they are receiving isn't anywhere to what they need.

The first day I was there I was helping wash the floors and this little boy, named Carlos, comes up to me dragging a miniature chair set for a dwarf behind him.  He placed it beside me, told me to sit after calling me Mama (later I would learn he likes to call everyone Mama

, and then took the mop from me and proceeded to clean for a while.  Then he came back and returned the mop, and I would proceed to start mopping, and then he would decide it was his turn again so we repeated this for a while.  It was super cute and it made my day a little better.  A couple of the children are really with it, walking and talking around, but most of the children are in their own world.  They nod and smile when you talk to them, but you never really know how much they process.  I changed my first diaper there (and felt really bad for my victim), but once you get into the zone, the smells don't get to you quite as easily.

I included a picture of Tumi (above), but it was forbidden to take any pictures of the children at Madre Teresa.

This will conclude my Peru blogs…I hope they were enjoyable reads!