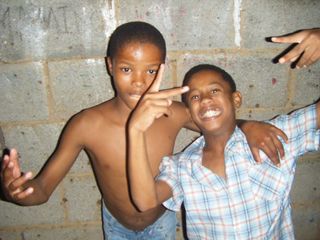 Wow, so much to report after just two weeks! First off, we endured a ten hour flight, which gave me and the other volunteers a chance to meet and chat. We got to Johannesburg Airport early in the morning, then came to the Johannesburg Ritz Hostel to stay for two nights- for a hostel it is the ritz! It has a pool, bar and a pool table! We have made lots of use of these three luxuries. After getting to the hostel, we went straight out for a tour of Johannesburg and Soweto. We were all so tired after the all night drinks on the plane.

We went to the Apartheid Museum, where Hector Pieterson's sister actually works (for those that dont know, Hector Pieterson was the first boy to be killed in the End of Apartheid Riot, at only 13 years old.) We finally got back, swam in the pool and had an early night. Today, we went to the orphanage, where we will be living starting tomorrow. We met some of the tiny babies and then the older children when they got back from school. All the babies and children were so happy to meet us and were reaching towards us. Then we had an orientation, where we learned there are 90 children at Othendweni, including 30 babies. We came back to the hotel, freshened up, went for a meal, then spent the rest of the night in the bar, where we had some great conversations.

Everyone I'm traveling with seems great so far. We all get on really well and all have great stories to tell eachother. So far, so good – although I'm aware this may change at some point! The school children here seem to walk very far on dangerous roads for school, which in the UK (where I'm from) just wouldnt be allowed. People stand in the middle of these dangerous roads trying to sell things to drivers, which also would not be allowed in the UK! Taxis are big, and drive people around cheaply. They beep as they're driving if there are seats for other people to jump in and share the fares!

Things here are so different- in some ways great and some ways bad. I am enjoying what I am doing although I slightly miss things. Sorry if I have rambled on!

Off to live in Othendweni Orphanage tomorrow and off to bed now. Hope all is good back home!

Learn how you can volunteer in South Africa