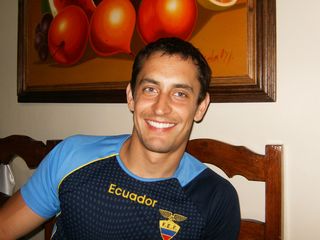 To the best of my knowledge, every Spanish-speaking country is officially Catholic, and Costa Rica is no exception.  Unlike my experience in the United States, Latin countries celebrate Semana Santa, or Holy Week, as the most important event on the church’s calendar.  I have experienced Semana Santa in Spain a number of years back, so I have a vague idea of the processions and community events
to be expected.  This year, however, I am getting a more up close look at what is going on.

My house dad, Reiner, is the events coordinator for his church in the town of Cubujuqui,  which abuts Heredia to the West. Last week, the house was filled nearly every night with people planning the celebrations for the upcoming holy days.  They also worked assiduously on making decorations for the church.  At our house, most of the work went into vestments for the statues of Jesus Christ, Mary, Saint Paul and Saint Peter, which are made anew each year.  Reiner designed the garment for Jesus himself—a big and important job for a faithful Catholic—and another woman did the embroidering.  Our house remains the repository for a number of dresses to be used by girls who will represent saints, angels, and other biblical figures.  Reiner has been active in recruiting angels among my American house sister and her friends, and they will play a significant role in the parades as well.

For my part, I was asked to help prepare the church, which turned out to mean carry things back and

forth across the street.  The statues of the religious figures previously mentioned had to be removed from the church and replaced by statues of the same figures but who had different facial expressions.  The new figures are also attached to stands with handles front and rear, since they will be carried around the streets of Cubujuqui for a number of processions.  Luckily, due to my time spent in the Army, I am especially good at carrying things, which was also fortunate for the other people working, about a half dozen, who were mostly in their 60s.  After about four hours of moving things around, I noticed that I was carrying an ever-greater percentage of the loads, but I didn’t mind.

One moment in particular made me smile.  The Christ’s tomb, which is the heaviest of the objects to be carried during the parades, had to be removed from the church until the appropriate time—it was likely
the primary reason that I was asked to be there.  So, with nine other men, we lifted and carried the tomb, small step by small step, looking a bit like a group of ants carrying off a piece of watermelon.  Years back, when I was in Spain watching the Holy Week parades and feeling sorry for the men carrying the (much bigger) statues down street after street, I never guessed that I would be doing the same.

Read all of Bradley's blogs from Costa Rica