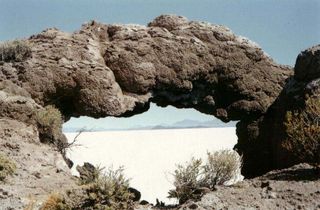 I'm Amanda; I'm a pre-med student from Texas visiting Sucre, Bolivia for two months. I'll be taking Spanish classes for three weeks and then volunteering at Hospital Psicipedigohico. That's a mouthful, but it just means that it's a hospital for disabled children.

Here I am! I found out at lunch today that my family has internet in one of their rooms with an Ethernet cable I can use.  That's good- I don't have to lug my computer all the way to the Spanish School to use theirs. It wouldn't be that much of pain, but the school closes after morning classes for lunch, so I'd have to walk there again after lunch to use my computer.

I got to La Paz, Bolivia after an all-nighter from Miami at 5 in the morning. It only took a few minutes to get through customs, which surprised me (they didn't even look at my yellow fever vaccination records, which I was slightly disappointed at. I mean, the shot cost money, and it hurt, and they didn't even care? Sad.) La Paz is at an altitude of over 13,000 feet, and I get altitude sick in Colorado at 8,000. So after about 30 minutes in La Paz my hands turned blue and my stomach flipped over- I almost threw up when I stood up to board the plane. Fun stuff. From La Paz I flew to Santa Cruz, which had an entirely empty airport, so I spent that four-hour layover sleeping off the leftover altitude sickness. And from there it was a 30 minute flight to Sucre.

There were children at the airport who ran alongside the runway when the plane landed and were begging for money at baggage claim. Sucre's bigger than I expected; the airport's on the outskirts, and the buildings start out really dilapidated but get much more well-kept as you get closer to the center of the city, where my host family and school are. The center of the city's beautiful, with flower gardens and white colonial buildings with red roofs. The buildings are all squished together like in San Francisco, but it's a lot less city-like, somehow. People are all over the sidewalks and streets, and the cars don't follow any traffic rules that I can tell, but go pretty slowly. There are vendors in the streets selling fruits and juices and empanadas and saltenas; I haven't tried either yet but I'll let you know how it goes when I do (and no, I haven't drank the street vendor juice for fear of traveler's diarrhea, although the other student who's with my family has, and he seems fine).

My host family lives in one big compound that has one door to the street. There's a courtyard that works kind of like the living room, and each bedroom, kitchen (there are two) and bathroom walk out into the courtyard. The grandmother, two sisters, their families, and maybe some cousins all live in the compound together… I'm not really sure how the family dynamic works. I guess I'll figure that out in the next two months. I know more Spanish, I think, than they know English, so communicating is an interesting game. There's another student who also lives in the compound, but our host families are different members of the big family, I guess… I eat in the kitchen with the grandmother, one of the sisters, and the cousins (I think), and he eats in the other kitchen with the other sister and her son. I wasn't clear on that this morning and went two the wrong kitchen… the abuela had to come find me. I can't understaand her very well, but it was along the lines of, "I couldn't find you! Did you hear me looking for you? You eat with me in my kitchen, not here… come with me!" And now it seems to be a joke among everybody that I went to the wrong kitchen. But everyone's very friendly and patient with me needing them to repeat every single thing they ask me.

Ah. There's also a dog named Fluffy. He's a German Shepherd- Labrador mix, I think. Not very fluffy, but he lets me scratch his head.