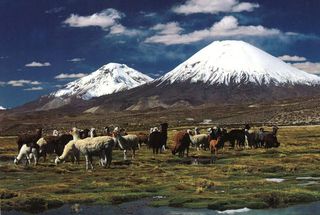 As I sit here in bed, my body aches from snowboarding yesterday, my mind aches from the thought of leaving Chile (despite the fact that I am coming home to wonderful people, and exciting things that I get/have to do) and my wallet aches, just a little, after spending $30 for a salmon lunch on the mountain.  But after all, I am coming back from traveling so I have no excuse not to be BROKE:

Because, as I have discussed with some of my fellow skiers, those are kind of essential characteristics for someone returning from abroad.

So where did I leave off?

Well, lets start with the fact that exactly a week ago, yesterday, I said goodbye to my first Chilean friend (well half-Chilean) as she got in a car with her family to fly back to Mississippi to continue law school in Indiana (Ya, I remembered!).

But before we let Morgan leave, we had a few adventures together!  We sumitted the top of Cerro San

Cristobal, which is only about a 30 minute walk (on the way down) but took us about 2-3 hours on the way up…because we stopped for a picnic lunch…The we made our way to the artisan markets of Santa Lucia and Bella Vista where we windowshopped and real shopped for some touristy/artsy/authentic Chilean gear.

The next day, on Morgan’s final morning, we returned to Santa Lucia, not to shop (well maybe a little), but to climb the small hill that surrounds it to get to the top of a castle like fortress with treacherous (and slippery) stairs to reach the top of a pillar where we had a 360 degree view of the city…and all of its smoggy goodness..

After that (or before..I don’t truly remember the little details), we went to the amazing museum underneath LA MONEDA (the Chilean White House) where we saw heart wrenching photos of some of the children and lifestyles of South America. The pictures were next to each other in a very dramatic fashion. The first one to catch my eye (and my heart) had a 6-7 seven year old playing in the street, with a gun, pointed directly at the camera (audience).  Which then drew my attention to the neighboring photo where 3 kids were sitting and hanging out, while a blanket covered up what could only be the remains of one of their friends, lying in the street a few meters back.

We left the photos for a more inspirational (positive) exhibit…and because we had stared at each one for more time than was necessary to let them sink in, but not long enough to every be comfortable with the sights being depicted…but we meandered our way over to the other exhibits where “REHECHO in CHILE” showed how a group of artists took garbage (computer parts, the tops to soda bottles, SHOPPING BAGS) and turned them into swingsets, shoes, jewelry and more…(Look them up on Facebook!)

And we left the musuem…to do God knows what…because I don’t think we went straight home, I can check the photos later…but the important thing is that we eventually made it home, where Morgan’s parents (who were visiting Chile at the time) were packing up the last of their gifts and we sat down for our final despidida (farewell and also lunch in this case).

With tears in our eyes and love in our hearts, we unofficially planned our reunion in California during Morgan’s spring break, where we would all get together for more good times, song-singing, sock knitting, non-black tea drinking, judgement-free, family-esque fun.

So my blog that was supposed to cover a full week, to about 40 minutes to capture 2 days of farewell….so what comes next in Part 2?  Well after a bathroom break, a cup of Mate and whatever I can put down on e-paper before running out to enjoy my final full day in this country….