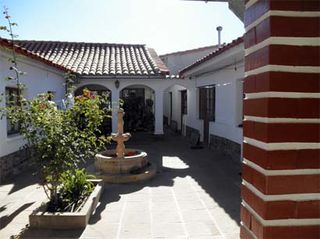 And here I am again! Not much new going on, but more to tell you that I didn't in the first post.

There's a surprising amount to say about the food, actually, so I'll just stick with lunch right now. It's the biggest meal of the day; for other meals we eat barely anything. So it's huge. The first course is always soup. It's made of broth, and it's always got a huge chunk of meat and big piece of potatoes or two in broth, along with spices and some kind of starch like rice or beans. It's a big bowl of soup; my first day, I thought that was all there would be.

The second course is usually a starch, like rice, pasta, potatoes, corn, or a combination of any of those, with a meat dish, like steak and poached eggs, or pork, or meat-filled omelets…  Eggs are lunch food.

And then fruit and/or ice cream for dessert. The ice cream is called "helado de soya", or "sualla", pronounced soy-ya.  I thought maybe that it was soy ice cream, but they insisted that it had milk in it… so I don't know if sualla is soy or not. They did say it was some kind of grain, and it tasted a little like pepto bismol..

In other words, lunch mostly consists of several different kinds of meats and grains, with nothing to drink. I don't think my family drinks much water. Only coffee and tea. It sounds like I'm exaggerating, but if I understood them right, that's what they told me.

School's going well. My teacher's named Yerko, and two of the other students in my class live in the same house-courtyard-thing as me, with one of the other family units of the extended family. So we do homework together (we get assigned a lot of homework). Today we learned the past imperfect tense, which I learned in high school and remember more or less, but the review definitely helps. What I really need is a review of the irregular verbs in simple preterite.

And a Fluffy update: I spent a while scratching Fluffy's head while I was on Skype with my parents. Now whenever I'm outside he comes to sit by me and when I'm in my room with door open he sits a few feet in front of it and watches me. My family gets a kick out of that.

I started this post before lunch and finished after, so I have an update on food: Today the soup was "sopa con arroz y papas fritas". That's right: rice and french fry soup. It's apparently a favorite- my eleven-year-old host sister was super excited about it.  And the second course was some kind of fish in broth with rice. The fish still had bones in it- they were constantly warning me to "Ten cuidado"- Be careful. I guess they don't want their gringa choking on those invisible, sharp, little fish bones!