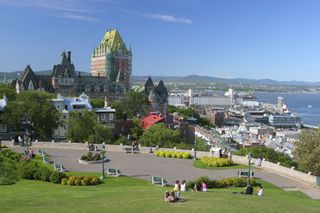 Meet Viviane Brassard, Director at AmeriSpan's new Quebec City French school. Viviane is proof that AmeriSpan is committed to finding the best staff, as we switched our partner school to follow her!

What is your background?
I'm 61 years old and live in center Quebec City. I have 2 daughters and 6 lovely grandchildren (yes.. 6!) aged from 2 months to 6 years old.

One experience I want to share with you: In 2008, Quebec City celebrated its 400th anniversary. One outside concert was organised on the Plaines d’Abrahams. Sir Paul MacCartney was the performer. He wanted to address himself to Quebec's people in French so, I, myself, was asked to be his teacher and the person who adapted his French lyrics. I'll never forget this wonderful experience.

Do you travel abroad often?
At least once a year- for work, to visit friend in the France or the USA, or sometimes just to be a tourist!

Have you studied abroad?
Yes, I studied life.. I lived in Africa with my husband and daughters for three years during the 80's.

Which languages do you speak or have studied?
French and English – and I understand a little Spanish and German

How and why did you get into the Study Abroad market?
Well, it really was a gift from life.  I studied Health Science, got married – stayed home with my children for 17 years, always loved the French language and suddenly had the opportunity to work at a French school. I have been in the business for over 20 years.

When did you start/join your organization?
I started 21 1/2 years ago.

What is your job or function at the organization?
I am the Director.

What do you enjoy the most about your job?
Meeting people – different people from different countries – meeting people opened to learn a foreign language no matter the age their age.

Tell us one of your biggest challenges in starting your organization.
Starting it was the biggest challenge of my life. Directing another school for 17 years helped a lot but all the provincial administrative part to start a business was huge work…. Yessssss, I did it!!!

Tell us one of your biggest mistakes in your job, studying/teaching a language and/or traveling abroad.
Hmmmmm i have to think, because while I try not to make mistakes, I may have made some… maybe waiting too long before i started that new school 21/2 years ago…

How did you and amerispan begin working together?
While i was Director of another language school I worked with AmeriSpan enjoyed it, so i was eager to start working with AmeriSpan again..

Can you tell us about your school’s philosophy, specialty and/or why you think it is special?
At école québec monde we teach only french language. Our goal is the world recognition of the french language, the french culture and the french society in north america. The province of québec is the only province in canada where french is the official language. Quebec city is the most european and french speaking city in canada.

Anything else you'd like to add?
Perhaps some advice to potential participants, teachers, school owners or travelers to your country or city. Ecole Québec Monde is openned all year round – all seasons. No reasons for not coming to québec in winter time. Even if january temperature can do down to -30, you can ski down hill or cross country at less than 30 minutes from downtown. Same for dog sleigh. You can skate on the plaines d’abrahams or in the old city. It is magic!! Winter time is a wonderful experience: walking in the old historic city all covered with snow, going inside a café and drink a hot chocolate… hummmm life is beautiful even in winter time!