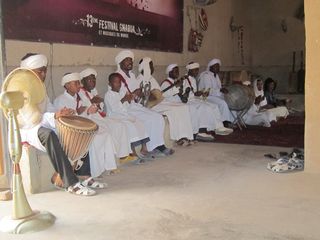 After just finishing my second week in Rabat, I feel like I am understanding the lay of the land a bit better.  I know how to use the phone cards and payphones, where to buy good products, what people to avoid, and what to eat (more or less).  Instead of feeling overwhelmed, I feel more at rest.  I had the amazing opportunity to travel to the great Sahara desert this weekend as a supplement to the program; I had to pay extra.  Despite the fact that the price of the trip was 1500 dirham, it was well worth it.

The trip had plenty of stops and opportunities to see different places on the way to the desert.  In other words, I did not just stick my head in the sand the whole time.  The trip consisted of three sections, which spanned the entire weekend.  The first day began after Friday's lunch.  We got off to a late start, but then again, there was a group of high school students numbering about 25, which required a larger bus and slowed the process down.  I believe this trip was successful in many ways, but also lacked a few important points as well.  Right off the bat, I knew, due to the nebulous itinerary, that there were going to be some spots in the trip.  I am almost sure they did not prepare for the number of students participating in the trip.  I believe the total was somewhere upwards of 50.

Nevertheless, we traveled on the road for about six hours, including two breaks, before arriving to our destination for the night- a four star hotel called Hotel Taddart.  It had curb appeal, and the inside was intricate, welcoming, and well-lit.  We were met with music and dancing from a traditional group of the area, Atlas, and enjoyed hot mint tea; it was a spectacle.  I am not sure if this was customary, but the foreigners were encouraged to participate and make fools of themselves.  Also, it was a pretty good time consumer while we all waited for our rooms and explored the hotel.  After obtaining a key to the room, which I shared with a native Spanish guy whose mother is Moroccan and father Spanish, I went to eat dinner, which was a three course Moroccan soup, cous cous, and fruit and sweets.  After dinner, the owner of the hotel gave a few informative comments about traditions of coffee and hospitality in the Gulf, his home region, and served us all free coffee thereafter.

After getting a solid 8 hours of sleep, I rose at 7 a.m., to prepare for an 8 a.m. blast-off, which ended up being about 8:45.  We were all eager to get to the Sahara, but there were a few stops in between.  We stopped at a fossil factory, which excavates fossils from the ground, cleans them, and shapes them into various items for sale, including fountains, mortar and pestles, and necklaces.  We also stopped at a Mausoleum, a marketplace (to buy turbans and jalaba, or head-wraps and long traditional garb), a qasr, and a restaurant (where we had madfoun, or berber pizza).  After making a few stops, we transitioned into 4×4 vehicles.  Luckily, I joined an amicable group and a bold driver.  We drove towards the desert on jeeps, which is a different experience than pick-up trucks, which I had experienced in Jordan, but it was pleasant to enjoy air conditioning.  We had one stop before the suspenseful camel rides, which was actually in an area that was Sudanese inhabited, however, now, was Moroccan inhabited.  We were served dates, almonds, and hot clove tea, however the main event was a cultural dance and musical performance using instruments that made a mellow clap sound.  They were shaped like a gourd, but were metallic and oval, almost like two elongated ovals overlapping with a half-sphere pounded into the middle of each oval.  It was a cultural spectacle.  All the students participated and danced; it was quite fun.

Afterwards, we finally began the final descent towards the camels.  We loaded up with water and hopped on camel caravans and in no time we were trotting along uncomfortably.  Although I was not at ease after the first fifteen minutes on my camel, I found myself at awe with the Sahara.  Everything was picturesque.  I did not chat all that much with the person in front of me or behind me because I was constantly looking around, left, right, up.  I was amazed, beyond the fact that they have been doing this for years most likely, that the guides knew exactly where to go.  Sand dunes shift and tracks are lost.  One guide once said that he traveled for seven days in the desert.  Unbelievable.  We made it to base camp during the night, where we enjoyed a nice three course meal of fresh vegetables, chicken tajeen, and honeydew melon.  My caravan and I situated outside of base camp to sleep right underneath the stars.  Whether that was permitted or not, I will never know.  I trekked to the top of the nearest high sand dune in the area immediately.  After arriving at the summit, I sat and drank.  I drank it all in.  A panoramic view of the land for miles, with the moon illuminating the dunes like a light bulb in a crawlspace.  I was enthralled.  I made my way back down to my sleeping situation, which was very simple.  I donned long clothing and my kofyyah from Jordan, which I wrapped around my face to block sand blasts during the night.

After sleeping very little, I woke up at five a.m. to catch the sunrise and beat the heat.  We made it back to the original location in about two hours and had breakfast and clean-up time.  After a jeep ride through the desert and giving farewell to our driver, Hameed Yacouby, we arrived at our buses.  This time, returning, I took the smaller bus, and I was lucky enough to sit next to a native Moroccan, which enabled me to increase my darejah vocabulary.  It seemed to take awhile to return to Rabat, even stopping in Irfan, a beautiful town that looked much like Lebanon.

I arrived at my home at 10 p.m. and felt completely spent, which was a necessary sacrifice for a once-in-a-lifetime experience.  I do think the school should consider a few amendments to the schedule, but trips are constantly needing to be improved.  I heard that this particular trip the restaurants offered vegetarian options, which is a very nice.  The Spanish say, vale la pena, which essentially means one should accept the downsides for the sake of the experience, which is true.  I believe this trip is a must-do if you are in Morocco, just make sure you always have water and are always well nourished nutritionally.  The trip was educational, awe-inspiring, and unforgettable.

See all of Cameron R.'s blogs