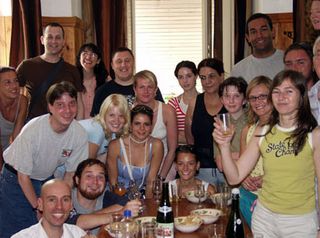 It is amazing how different my surroundings are here.  Americans look compulsive compared to the easy going Uruguayans. My host family's roof is more of a patio. And in the U.S., each room in the house is designated a specific purpose.  Here each room is used, but there is no “tv room”, “dining room”, etc.

I bought a cucumber and tomato the other day and she saw me eating them.  I was not sure what was an appropriate way to tell her that I wanted more veggies without offending her.  I was so happy when she gave me a salad today.  I made sure I told her about 8 times how good it was.

We went to watch a big soccer match last night in a restaurant/bar with Uruguay against Brazil for the cup of S.A.  Brazil won, but they were supposed to be the better team.  You could hear fireworks going off and the people's faces were great.  They are fanatics.  The Uruguayans say their religion is soccer.

One of the guys with us who came to watch the match is South African, but looks like he could be Brazilian.  He was worried he would be mistaken as a Brazilian and hassled, so he wore a shirt that said “Out of Africa” and he kept showing it off.  Two of the other guys are Brazilian.  They kept loudly cheering for the Brazilian team Santos in Portuguese.  Luckily, no problems arose.

We left the bar a little before the game ended.  On our walk home, we walked past the police station.  There were about eight police cars and a giant bus full of officers. Once one guy throws a punch, it becomes a group fight.  The police were prepared and everything was quickly under control.  I heard later that the two teams, Santos and Penarol, fought after the game.  In general, fans are very emotionally invested in their teams, much like in the US.

Check out all of Renee's blogs from Montevideo