Study Abroad Blog » Guest Bloggers » Spanish and Tastes of Peru: Getting To Cusco 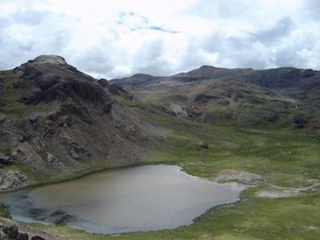 My name is Courtney and I am studying Spanish in Cusco, Peru.

I am 23 years old and I am from the state of Kentucky in the United States.  I study at the University of Kentucky and this year I will graduate with two degrees, one in International Studies (my specialization is in the developing world) and the other in French.  For my degrees I spent one year studying abroad in Caen, France and two summers doing volunteer work in Uganda.  After I graduate, I plan to obtain a Master's degree in Public Health focusing in Global Health.

Why, might you ask, do I want to study Spanish when my degree is in French?  For three main reasons:  First, I have always been fascinated by languages and I would love to know how to speak as many as possible.  I have learned so far that with a background in French and English, Spanish comes fairly easily.  Second, I want to learn as many languages as possible so that I have the flexibility to live, work, study, and travel in as many places as possible.  With French, Spanish, and English you have a large portion of the world covered!  Third, my boyfriend, Cristian, is Colombian and he has been teaching me Spanish because I want to know more about his language and culture.  Actually, I have never had a formal Spanish class, until now, and all that I know about Spanish has come from learning from Cristian.

Now that you know a bit about me, I should begin by telling you about my trip.  My flight schedule was from Cincinnati to Miami, Miami to Lima, and then I had Amerispan organize a flight for me from Lima to Cuso.  My flight from Miami was delayed, but LAN airlines paid for all passengers to stay in a hotel over night and they included dinner and transport to and from the airport.  On my flight, I met two Peruvian students who were returning home after having studied abroad in the United States.  They were so friendly that I had a great feeling about how my trip would turn out.  Because of my flight delay, I missed my flight to Cusco, so I called the program in Cusco and Evelyn was very helpful in giving me advice!  I was able to get a new ticket with Star Peru airlines for the next morning and LAN airlines paid for me to stay in another hotel connected to the airport with two free meals since they made me miss my flight.  At the hotel restaurant I tried Seviche, a famous Peruvian dish of raw fish that is “cooked” (aka marinated) in lime or lemon juice with onion, hot peppers, and sweet potato, for the first time and it was fantastic!!!!  I also tried a Pisco Sour, which a well-known Peruvian cocktail made from a type of white grape brandy with eggwhites, nutmeg, and some other ingredients.  It was tasty, but a little too sweet for my tastebuds, although for such a sweet drink it was pretty stiff.

The flight into Cusco was beautiful!  We could see the coastline in Lima, then the desert, then the mountains.  Even though we were so high in the sky, we didn´t seem to be very far from the ground since we could still easily see the mountain peaks and villages on the mountain sides and in the valleys.  The clouds seemed like they were napping on the mountains as they were so close that they could touch.  It was pretty extraordinary!  And landing in Cusco was breathtaking!  Not only for the wonderful sight of my new home for six weeks, which is beautiful I might add, but also because of the way the plane landed.  Since Cusco is in a valley it is a rapid decent with a sharp turn to land on the runway!

More about my host family and school to come!

Read all of Courtney's blogs