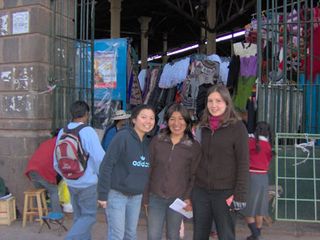 One afternoon we got to have a meeting with a real shaman!  It turns out she also worked as a Registered Nurse and a massage therapist.  And there I was expecting this witch to come in with a cape or something.  But she was really sweet and gave us an explanation of the three types of work she does: the first one is reading of our cocoa leaves, the 2nd involves an egg, and the 3rd a guinea pig (cuy).

I'll explain the latter two because she actually performed the first one for all of us.  The egg and its yolk represent the soul and the body, and the shaman is able to tell how in synch these two parts of the human are from looking at their egg.  The egg is continually rolled over the person's body, starting with the head, touching the arms, then the stomach, and ending with the toes.  This allows the egg to absorb the person's energy which is interpreted when the egg is broken in a glass of water.

The cuy also works in a similar matter.  A live cuy (has to be pure black) is passed over the person's body (though I'm not sure if there's contact), and is then killed and read.  The problems seen in the cuy are thought to be the same as problems the person is suffering, will suffer, or has suffered.  For example, if the cuy had an odd coloring around its kidney, it's a warning sign for the client.

In the cocoa leaves, the first thing we had to do was choose our leaves in groups of three.  The leaves had to be whole and in tact, with no holes in them, and we placed them on a small mat until all the sides were fulfilled.  Then she gathered all the leaves, grabbed a handful, and asked us each for three questions.   It was like a genie in a lamp or something, but it was fun at the same time, and after we asked our question she would blow/bless the leaves in four directions (for the four winds).  Turns out that I went first, so I asked your generic questions like when will I marry….oh man, I don't need to explain that one.  The second question was where will I live and this was a bit more interesting.  She told me right off the bat that I was going to live "far" away from my hometown and that a lot of children would be involved in my life…so I would most likely be working with children.  (Both of these things have been slow on-going realizations for me).  My 3rd question was a bit more personal so I won't say it here, but she was pretty dead on right.  Freaky.  After this, the three of us girls went out for dinner and had a pretty lengthy discussion about this…and in the end we decided that this was like horoscopes, but all in all it was still pretty fun to ask and hear some answers.  I'm still a bit superstitious though, I love these type of things.

Read all of Miko's blogs from Cusco, Peru