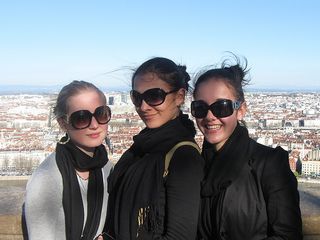 Basic (4/hours a day in the morning): Every student at the school has a morning class for four hours a day (starting at 9 a.m.), and there are several levels: debutant (starter), beginner, beginner plus, intermediate, and advanced.

Intensive (45 minutes a day after lunch): This class focuses on conversation, and,
again, there are several different levels. You can?t take the class if you?re a complete
beginner, since you won?t be able to say much at all. But, if you know some French,
take this class! You?ll discuss and debate about everything from Shakespeare to
politics. It?s great.

Super Intensive (45 minutes a day after the conversation class): After five weeks of
intensive French courses, I finally decided to take the Super Intensive class that focuses
on writing. It?s hard. Not only are you super tired after the other two classes, but the
writing in French is just really hard work! It?s not so much a class so much as it?s a
place where you go to write in French and then you hand in your work at the end of the
class to be corrected by the professor. Read the comments when they?re passed back,
and the class will help immensely!

After class activities: Every day there?s an activity where one of the professors will take
the students somewhere. One day we went to the park; another day we went to a
museum. Sometimes we play laser tag. It varies. What I like about these activities is
that 1) everyone talks in French almost the whole time 2) the professor will definitely talk
to you in French 3) you don?t have to pay to attend the activity, but you get a lot of
practice in French.

Click to see all of AmeriSpan's French schools in France.

Read all of Ashley's blogs from Lyon France.