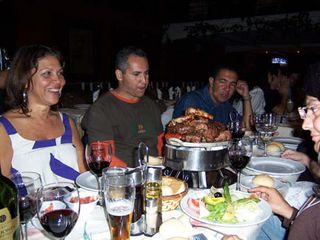 Chilean Mixology 102 – Terremotos y Maremotos  (101 is for Pisco Sour, but this is more interesting)

Directions (vary depending on location):

-Take 2 scoops of pineapple flavored ice cream and put them in a 16(ish) ounce glass.

-Take cheap white wine, Vino Pipeño (it tasted a lot like sangria)and fill the glass nearly to the top.

- Top it off with about a shot’s worth of one of the following (everyone I asked has told me different things) Cognac, Rum, or Pisco

-Spin it all together with a spoon or straw, insert the straw and..

A Twist: The maremoto ("Tsunami") – Top off your terrimoto with mint liquor for a listerine-esque experience thats at least twice as fun as dental hygiene.

Yet another classic Chilean beverage, this one is more of a tea than a mixed drink (however it has just as much sugar, if not more than, than the Terremotos).  However, this “TEA” is meant for summertime enjoyment as it consists of the following:

- MOTE: Grain like wheat product that looks like the result of cross breeding corn with granola and then boiling it until it gets soft.

- Huesillos: Dried Peaches, that are then put back into water and sugar to be rehydrated.

- The Tea: Pretty much, if you took canned peaches and used the syrupy liquid from it, that’s exactly what this tasted like.

- Spoon: To facilitate eating (and also make drinking from the cup somewhat challenging for my chilean hermana, but very hilarious)

My Mote experience was part of a larger journey where I summited to the top of Cerro San Cristobal to see the large Vergen who overlooks and protects the city of Santiago from atop of this giant hill.  She is lucky though, because on a clear day she can see for miles from the top of her perch.  However, yesterday was not a clear day….but through the smog and clouds, I could see the nearby mountain ranges and nearly the entire urban center of the city.