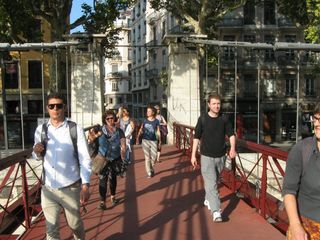 Normally, I would say you shouldn?t take advantage of men in order to practice your French, but I?ve made a few exceptions here. One night, while eating a crepe in Vieux Lyon (amazing crepes, by the way!), a man came up to me and said “bon appetit!” (a very common expression, of course), and I said “Merci!” and smiled (thinking he would just pass by). He then sat down. I thought to myself, I wonder if he?s a nice guy or a weird one? He then started to talk to me slowly and carefully, and he complimented me on my French (which, by the way, is not good…yet), and then asked me out to a drink. Ordinarily, if I was back in the states, I would never have even talked to him for more than a few minutes, but in France I?m supposed to be practicing my French, right?

So, I told him that I?d rather just talk where we were sitting (with lots of people around), and we talked about everything from our families to our pets (beginner vocabulary, but still…I couldn?t believe I was having a conversation with someone really from France in French).

What I came away with from this experience was a greater desire to talk with locals and take some chances with my French. Be careful, of course, but don?t be afraid to speak in a language you?re just learning with locals. They don?t care usually, and are mostly just happy you?re speaking in French at all! Give yourself a pat on the back and ask a store merchant (or a cute French person) how they?re doing!

The people that I?ve met really enjoy knowing where you?re from and why you?re studying French, so make the most of it and practice your French with them! Even if you mess up and make a fool of yourself (which you won?t, but if you?d like to talk to someone who has made a fool of themselves – I?m right here), you really won?t be seeing these people for very long (depending on how long you stay). Concentrate on practicing your French and getting over insecurities about what people might think of you. Hey, it might even help you be a more confident person when you go back home!

Read all of Ashley's blogs from Lyon.