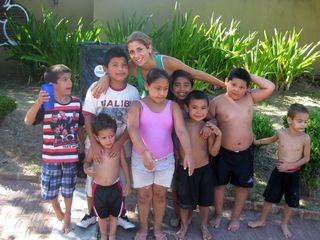 I remember vividly the first day that I started my work at the orphanage. I was accompanied by Maria, who is the project coordinator from the school for all the international volunteers and interns working in Buenos Aires. It was a 1.5 hour commute from the center of city. We had to first take the subte (metro), and then a train to the Provincia (outskirts of the city). It was a much anticipated visit. After all, I had been in Buenos Aires for over a month now, studied as much Spanish as I possibly could, and now I was able to carry a simple conversation. I was ready to begin!

I didn’t quite understand all her answers, but I listened pretty intently! Apparently, the staff there were also eagerly anticipating my arrival as the personnel including the volunteers were all women, and 90% of the orphans were in fact boys. Boys from the ages of two to ten years old. Hence, they much appreciated a male volunteer who could play with the kids, and perhaps help them calm down a bit. By the way, I am not suggesting that the women couldn’t do that! The women in fact did a fabulous job. However, sometimes boys relate to boys better if you know what I mean.

After a short walk from the train station through the quiet alleys in Beccar neighborhood, we found ourselves in front of the orphanage. It is a very modest looking house with a metal, sliding, garage-style gate at the entrance. I peaked thru the gate to see how it is like inside. I could see the kids sitting around the table and having lunch. This was it! I was a bit nervous, and also excited at the same time.

As we rung the bell, there ran five or six children towards the gate to open the door. Some were looking at us with a curious expression, and others laughing, just happy to see a new visitor. We quickly found out from the on-board manager that the director wasn’t there (not really surprised by now). We were asked to come in, and hang out until she would arrive sometime later. Within a matter of minutes, I found myself being climbed up by a couple of young boys no more than 5 years old, a couple trying to take off my t-shirt, and others pulling on my back-pack to see what’s in it! This wasn’t what I expected!